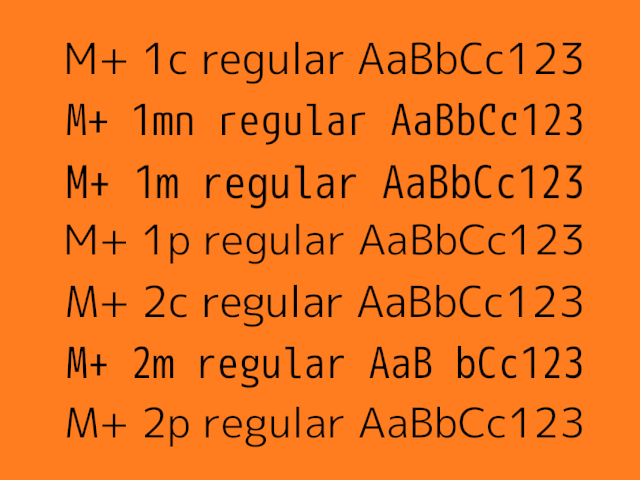 M+ FONTS are Japanese font families designed by Coji Morishita. The ‘M’ stands for ‘Minimum’, while the plus sign means above minimum. The M+ FONTS are a font family under the Free license. You can use, copy, and distribute them, with or without modification, either commercially or noncommercially.

Japanese and Latin proportional fonts are available in 7 (Thin to Black) weights.

Latin fixed-halfwidth fonts are available in 5 (Thin to Bold) weights.

In the Japanese fonts, there are 2 variations of Kana Glyphs. M+ Type-1: Consists of contrasting straight lines and hand-drawn curves, and M+ Type-2: Incorporates traditional feature of Kana script in the overall modern sans-serif design. The Kanji glyphs are identical between fonts of same weights.

In the Latin fonts, M+ P is aimed as sophisticated and relaxed design, while M+ C is optimized to be proportioned well in typesetting, M+ M emphasize the balance of natural letterform and high legibility. Each have 2 variations of the Type-1 and Type-2, corresponding to the Japanese fonts.