Theory of Type Design, by internationally renowned Dutch graphic designer and typographer Gerard Unger (born 1942), is the first complete and accessible theory of the breathtakingly varied field of typography. Of all designed objects letters are probably the most pervasive, as Unger explains at the beginning of his study. Very familiar yet amazingly diverse in their appearance … there seems to be no limit to human ingenuity when it comes to varying letterforms.

Unger approaches the diversity and creativity of the field with a wide-ranging, reflective, critical theory of how we design and make sense of text. The history of typography is surveyed, from cuneiform script to Wim Crouwel’s New Alphabet and today’s digital developments, and explored in relation to how our eyes and brain process various letter shapes in order to understand text.

This volume consists of 24 concise chapters, each clearly describing a different aspect of type design (from practical considerations like spacing and rhythm, legibility, size and italics to more ineffable considerations like personality and preference). This theoretical material is illuminated by more than 200 illustrations and practical examples, and an extensive glossary succinctly explains terminology and key ideas.

Internationally oriented, and taking into consideration the past, present and future of typography, Theory of Type Design will be an indispensible resource for graphic design students, professionals, and those with a general interest in text and printed matter.

Gerard Unger Born at Arnhem, Netherlands, 1942. Studied graphic design, typography and type design from 1963–’67 at the Gerrit Rietveld Academy, Amsterdam. He teaches as visiting professor at the University of Reading, UK. Department of Typography & Graphic Communication, and taught at the Gerrit Rietveld Academy till January 2007. From 2006 till 2012 he was Professor of Typography at Leiden University, the Netherlands. Free lance designer from 1972. He has designed stamps, coins, magazines, newspapers, books, logo’s, corporate identities, annual reports and other objects, and many typefaces.

In 1984 he received the H.N.Werkman-Prize, in ’88 the Gravisie-Prize, in ’91 the Maurits Enschedé-Prize and in 2009 the Sota-Award. In 2013 he obtained his phd at Leiden University, on the subject of Alverata, a contemporary type design with roots in the Romanesque period (±1000–1200) and in early Europe. He wrote articles for the trade press and, for example, for Typography Papers. One of his books, Terwijl je leest, has been translated in Italian, English (While you are reading), German, Spanish and Korean. He lectures frequently about type design and related subjects.

Be the first to review “Theory of Type Design” Cancel reply 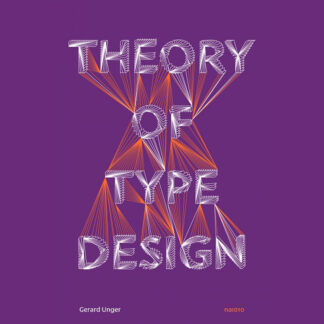