Description: The digital reconstruction of ichthys as a secret symbol adopted by early Christians as the “sign of the fish” or the “Jesus fish”. The product package contains files in EPS, SVG, PNG, JPG and PDF format.

The ichthys or ichthus (/ˈɪkθəs/), from the Greek ikhthýs (ἰχθύς 1st cent. AD Koine Greek [ikʰˈtʰys], “fish”) is a symbol consisting of two intersecting arcs, resembling the profile of a fish. The symbol was adopted by early Christians as a secret symbol. It is now known colloquially as the “sign of the fish” or the “Jesus fish”.
The first appearances of the ichthys symbol in Christian art and literature date to the 2nd century AD. The symbol’s use among Christians had become popular by the late 2nd century, and its use spread widely in the 3rd and 4th centuries.
ΙΧΘΥΣ (ichthys), or also ΙΧΘΥϹ with a lunate sigma, is an acronym or acrostic for “Ἰησοῦς Χριστός, Θεοῦ Υἱός, Σωτήρ” (Iēsous Christos, Theou Yios, Sōtēr; contemporary Koine [ie̝ˈsus kʰrisˈtos tʰeˈu (h)yˈjos soˈte̝r]), which translates into English as ‘Jesus Christ, Son of God, Saviour’.

This explanation is given among others by Augustine in his Civitate Dei, where he notes that the generating sentence “Ἰησοῦς Χριστὸς Θεοῦ Υἱὸς Σωτήρ” has 27 letters, i.e. 3 x 3 x 3, which in that age indicated power. (This suggestion is obviously spurious, resulting from Augustine’s ignorance of Greek.) Augustine quotes also an ancient text from the Sibylline oracles whose verses are an acrostic of the generating sentence.

The statement “Jesus Christ, Son of God, Saviour” affirmed the belief of early Christians in the twofold nature, of Jesus Christ being both fully human and fully divine. The belief in Jesus Christ being true Man and true God completes the Most Holy Trinity, that is the basic article of the Christian faith.

Be the first to review “Ichthys (ἰχθύς)” Cancel reply 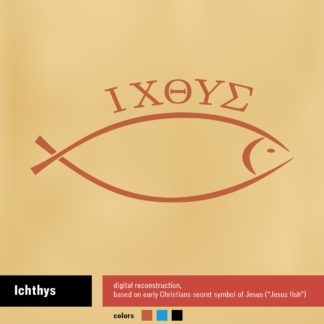