Description: The vector reconstruction of the “Ring of Kaloyan” could be of use for graphic designers and publishers as well as to people interested in the medieval history of arts. The product package contains files in EPS and SVG format for print and display use.

A golden ring, which was found in a grave near the Church of the Holy Forty Martyrs in Tarnovo (Bulgaria) in 1972, bears the Cyrillic inscription Kaloianov prăsten (“Kaloyan’s ring”). Historian Ivan Dujčev stated that the ring proved that emperor (or tsar) Kaloyan’s remains were transferred to the church, which was built in 1230. The identification of the grave as Kaloyan’s burial place is controversial, because the ring bearing his name cannot be dated to before the 14th century. Furthermore, the graves of all other royals who were buried in the same place are located within the church, suggesting that the ring was not owned by Kaloyan, but by one of his 14th-century namesakes.
The vector reconstruction of the Kaloyan’s ring could be of use for graphic designers and publishers as well as to people interested in the medieval history of arts.

Be the first to review “Kaloyan’s ring” Cancel reply 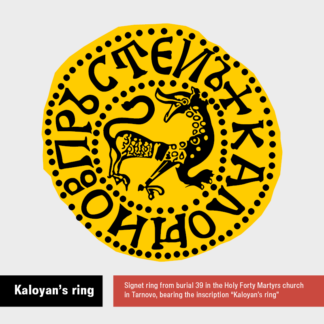