Samuil’s inscription is an Old Bulgarian epigraphic monument from 993. It is considered to be among the oldest dated Cyrillic inscriptions. Today it is located in the National History Museum in Sofia.

The inscription is a partially damaged marble slab discovered in 1888 at the construction of the Church of St. German in the village of German, Prespansko, today in Greece. It was carved by order of Tsar Samuil (997-1014) in memory of his parents, comrade Nicholas and Ripsimia and his brother David. It consists of 11 lines, written in the style of the so- old unction, influenced by the handwritten liturgical unction.

For the first time the inscription was promulgated by the director of the Russian Institute of Archeology in Constantinople Fyodor Uspensky in 1899, almost concluding with Constantine Irechek, Timothy Florinski and Lyubomir Miletic. In 1916 the inscription was transferred to Sofia from the ethnographer to the First Bulgarian Army by the writer Stefan Kostov.

The digital reconstruction of Samuil’s inscription could be of use for graphic designers and publishers as well as to people interested in the medieval history of arts.

Be the first to review “Samuil’s Inscription” Cancel reply 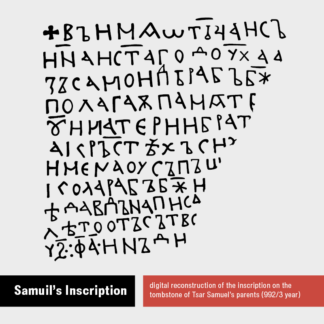