Vector reconstruction of the Cyrillic inscription of chartophylax Paul in the Preslav Round Church. The vectorization of the inscription is carried out in compliance with the most up-to-date graphic and typographic requirements for Bézier curves. The reconstruction could be of use for graphic designers and publishers as well as to people interested in the medieval history of arts.

Perhaps the most famous and valuable writing on the walls of the church is a Cyrillic inscription on the south wall of the premises south of the narthex, conventionally known as the baptistery. The inscription was clumsily written on top of a mortar putty and says in translation:

Despite being dated to the 10th century and its mention of the church’s dedication and its potential donor, it cannot be described a classic donor’s inscription because of its unnatural location and clumsy writing. Bistra Nikolova [ Nikolova, Bistra (2002). Pravoslavnite tsarkvi prez Balgarskoto srednovekovie IX–XIV v. [The Orthodox Churches During the Bulgarian Middle Ages 9th–14th Century]. Sofia: Akademichno izdatelstvo “Marin Drinov”. ] considers it more likely that the author of the inscription was a literate person who served under chartophylax Paul and desired to spread his fame. She believes the text may refer to the construction of the narthex only rather than the whole church, because she is of the opinion that the narthex may have been added after the building of the rotunda.

Other examples of the epigraphy of the Round Church include several short Glagolitic and Cyrillic texts and separate letters. Among the Glagolitic inscriptions is the Preslav Abecedarium, a liturgical text including the first thirteen letters of that alphabet; some of the Cyrillic texts were written on ceramic tiles. The names and descriptions attached to the icons are in Greek, while there are also bilingual inscriptions in Greek and Bulgarian. Individual letters inscribed on the walls illustrate the way Greek and simplified Glagolitic letterforms were combined to form the early Cyrillic alphabet. On the walls of the church are graffiti of Christian crosses, animals, and up to 11 depictions of ships. At least one epitaph has been discovered, inscribed on the tombstone of a woman described as “God’s servant Tudora”.

Be the first to review “Inscription of chartophylax Paul” Cancel reply 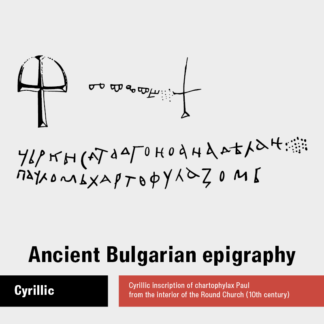 You're viewing: Inscription of chartophylax Paul $ 24.00
Add to cart