Vector reconstruction of the Temnic inscription. The vectorization of the inscription is carried out in compliance with the most up-to-date graphic and typographic requirements for Bézier curves. The reconstruction could be of use for graphic designers and publishers as well as to people interested in the medieval history of arts.

The Temnic inscription is one of the oldest records of Old Church Slavonic Cyrillic script from the territory of Serbia. The limestone plate was discovered in the vicinity of a school in the village of Gornji Katun, near Varvarin, in the region of Temnić in Pomoravlje. It was acquired by the National Museum of Serbia in 1909. The tablet represents a scientific conundrum as no other remains of an edifice were found and paleographic and linguistic analysis of the text reveals little information.

The inscription on the plate was skillfully engraved in uncial Cyrillic in seven rows. The short text contains the names of ten of the Forty Martyrs of Sebaste: Xantius, Leontius, Melito, Severian, Philoctimon, Angius, Heraclius, Ecdicius, Cyrius, and a plea: “Pray for us!”

Researchers do not agree on the original purpose of the plate or the place where it was found. Some of them believe that the content and the shape of the inscription indicate it was engraved into the holy table of the church it belonged to. Others think that it made one whole tablet along with the other three plates with the names of the remaining thirty martyrs. Medieval builders believed that the forty martyrs from Sebaste had magic powers, and that the edifice would be protected from collapsing if they were painted and their names were written on it.

Given the paleographic characteristics of the script and the linguistic analysis of the text, most of the researchers believe that the Тemnićki natpis dates to the 11th century. This epigraph of an anonymous stonemason, according to orthographic analysis, shows similarity with all old Slavic Cyrillic engravings. It thus is considered proof that Cyrillic script was used very early along with Glagolitic script.

Be the first to review “Temnic inscription” Cancel reply 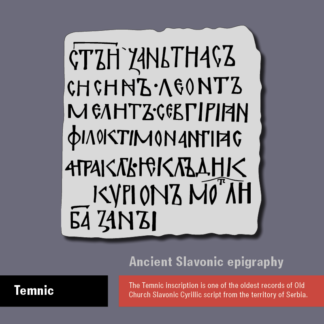