Tudor tombstone (Cyrillic) from the 10h century, discovered near the Preslav round church. The inscription reads:

“I am the tomb of Tudor, the servant of God. From this stone (are)… elbows to the wall. ”

The inscription is an interesting epitaph and is evidence of some changes that took place in Old Bulgarian during the first half of the tenth century.
The vector reconstruction could be of use for graphic designers and publishers as well as to people interested in the medieval history of arts.

Be the first to review “Tombstone Tudor” Cancel reply 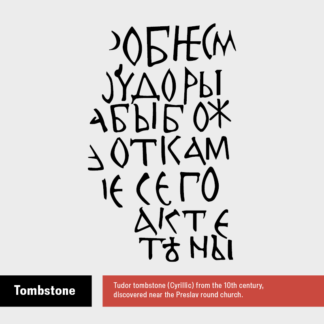