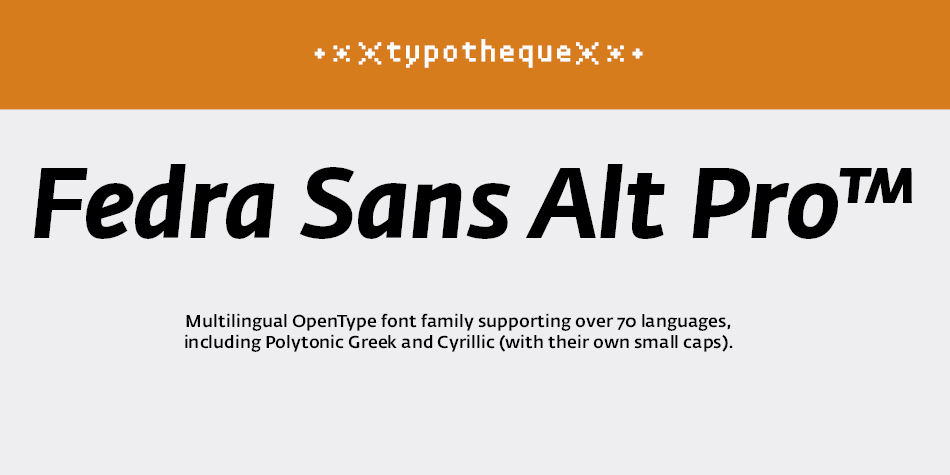 Fedra Sans Alt (alternative) was born out of curiosity what will happen if I were to remove all ‘features’ of Fedra Sans. The original design has a few unusually shaped characters, which became identifiable characteristics of the typeface. It was mainly the prolonged ‘f’, open ‘6’, ‘9’, ‘b’, ‘P’, and diamond-shaped dots that have added to the identity of Fedra Sans. The alternative version of Fedra removes those peculiarities as well as a dozen of other features for the sake of consistency. It relies on a subtler means of construction of typefaces, and hopes that the identity of the typeface can be recognizable through the whole character set, not just a few glyphs which drew all the attention of the viewer. This leads to a broader question of what creates an identity of a font, or whether font can have an intrinsic identity of their own.

After redesigning around 180 characters in the Pro set, Fedra Sans Alt functions equally well as the original typeface. It has a slightly different appearance and it proves that there is more to distinctiveness of a typeface than a few ‘key’ characters. The characteristics of Fedra Sans radiate through all decisions of proportions, curves placement, and spacing. Yet, Fedra Sans Alt is a typeface on its own, which, as the name suggests, may serve as an alternative for its older counterpart.

Design: Fedra Sans was designed in 2001 by Peter Biľak. In 2004 the OpenType Pro version was released with Cyrillic designed by Gayaneh Bagdasaryan.

Copyright 2001 by Typotheque. All rights reserved. 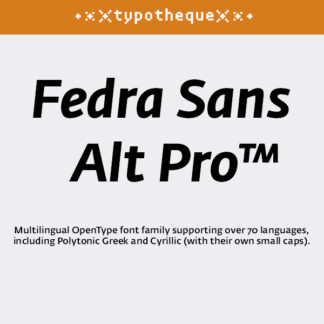