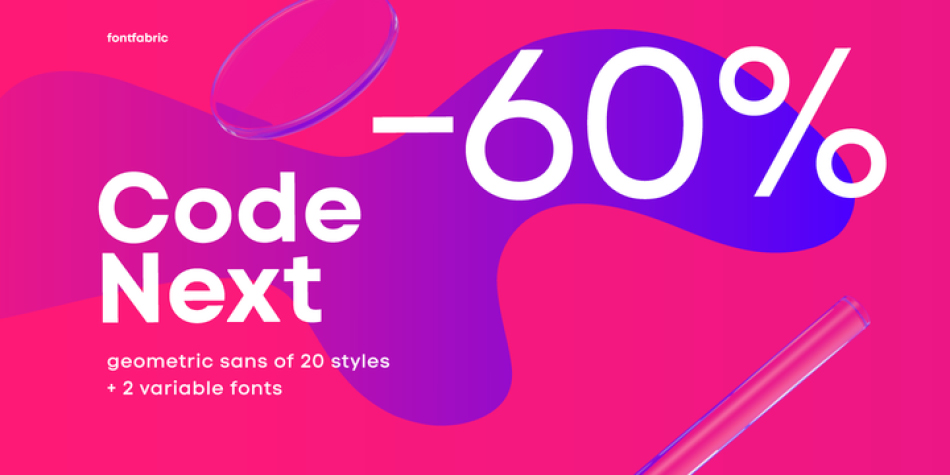 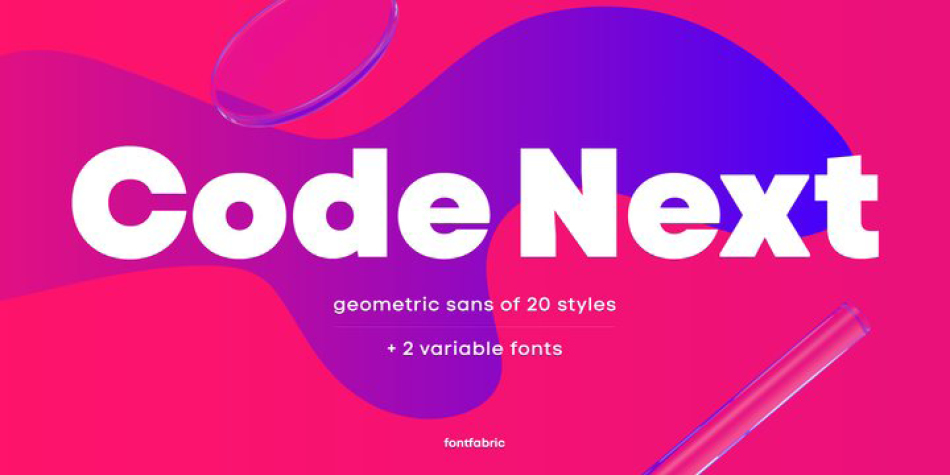 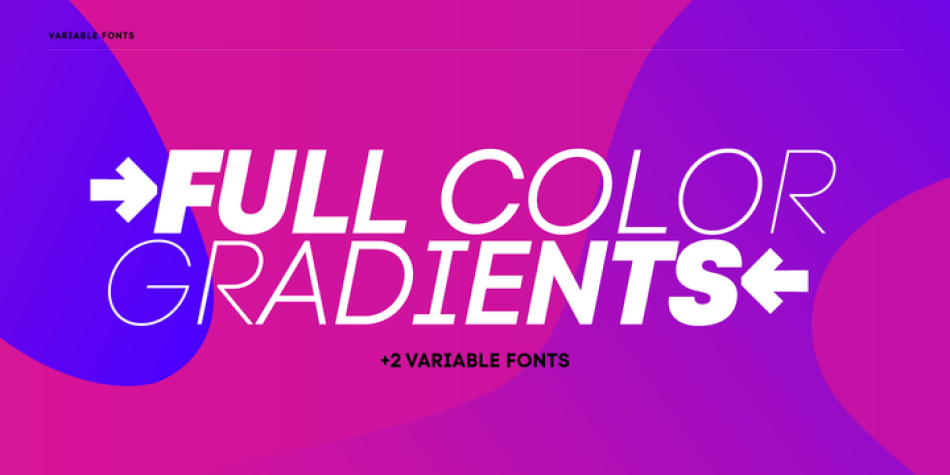 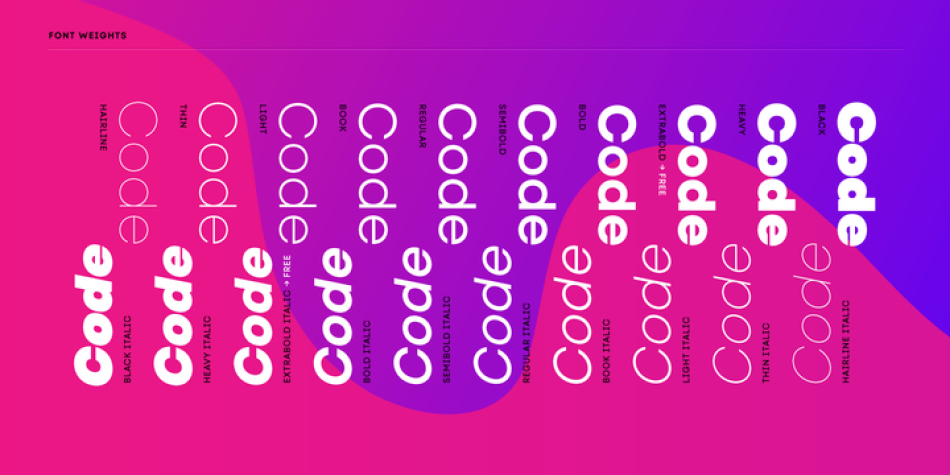 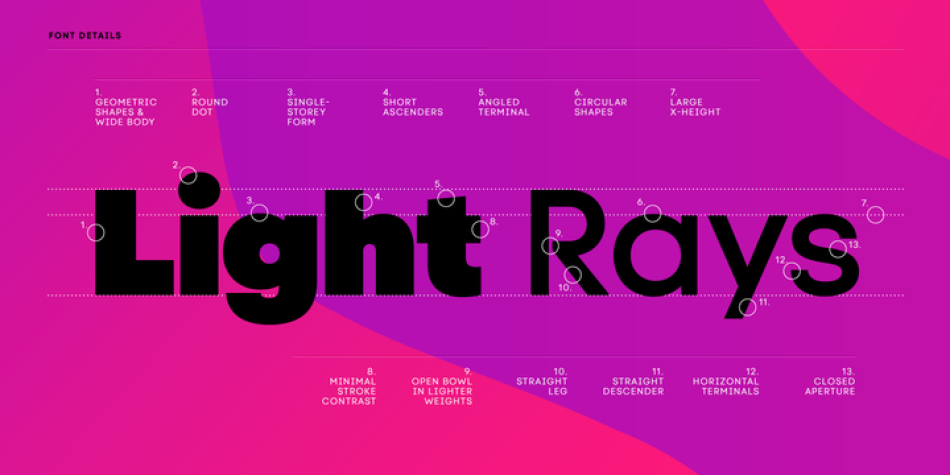 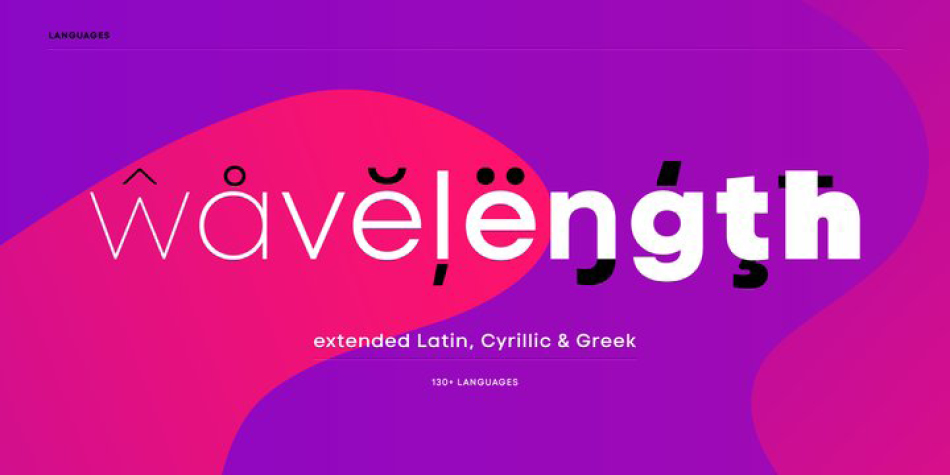 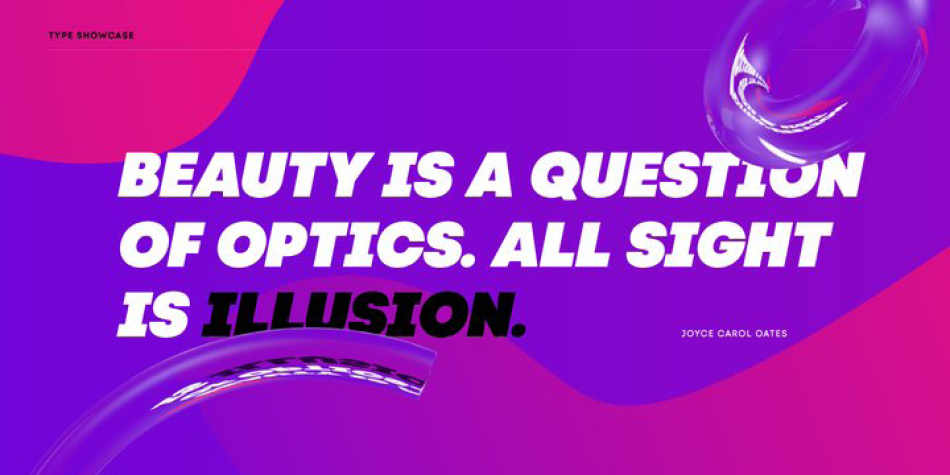 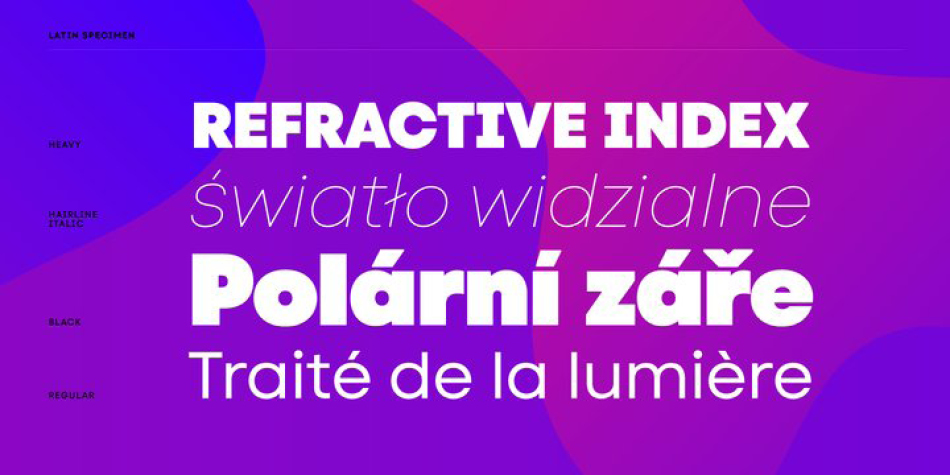 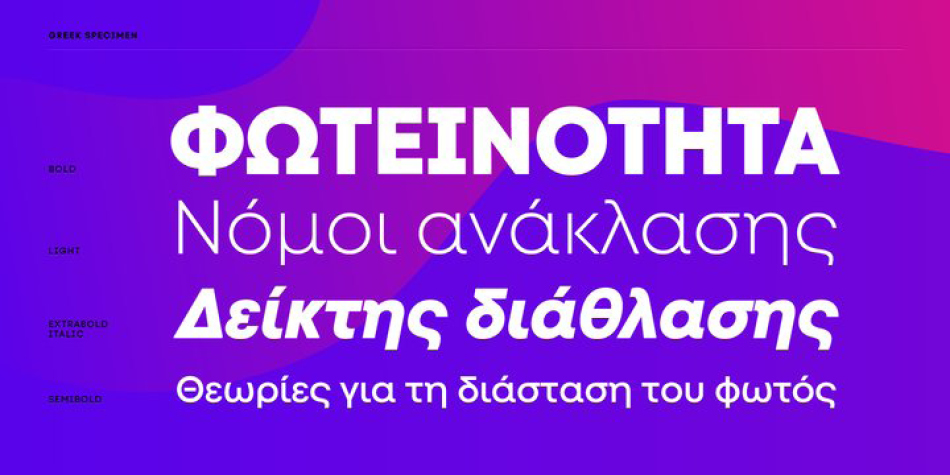 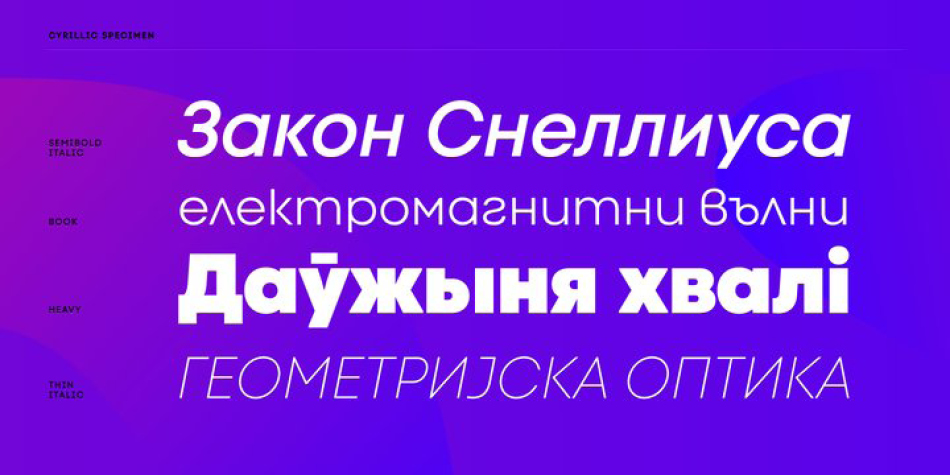 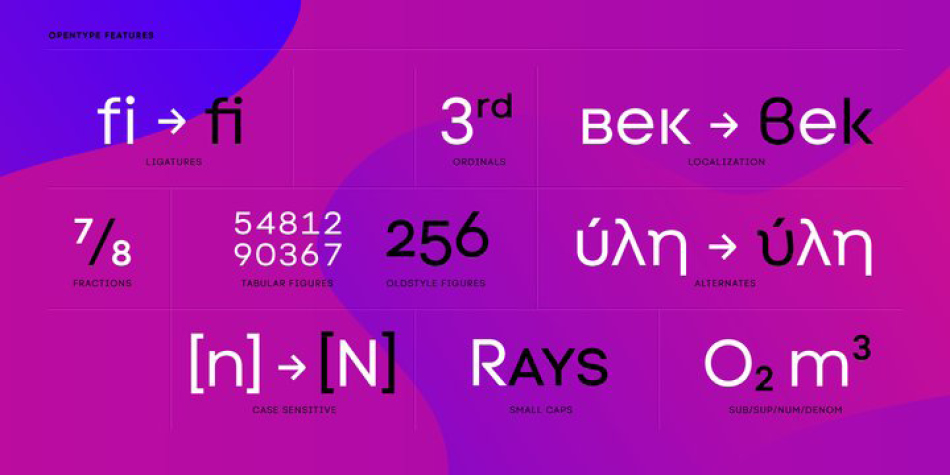 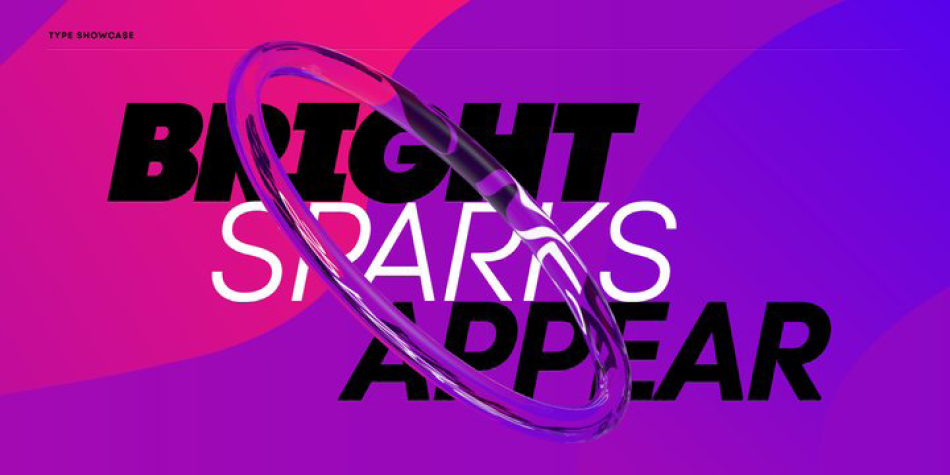 10 years later, one of the first geometric typefaces in our portfolio and a popular favorite of yours is rising to a whole new level!

Going back to 2011, the grotesque-inspired Code Pro was designed to complement memorable pieces that make a statement. Balancing between stylization and simplification, it was encoded with the distinct voice of basic organic shapes to stand the test of time. Little did we know, it would expand and live up to the potential of a “font from the future” as the new Code Next.

Today, a type family of 22 styles, this geometric sans solidifies its relevance and carries a strong constructive aesthetic through simplified forms with a twist.

These fit any modern design in print, web, and display visualization. Developed to go above and beyond, Code Next comes prepared for multi-script projects with Extended Latin, Extended Cyrillic, and Greek.

Explore Code Next’s versatility and switch things up with the help of 2 variable fonts, more than 1280 glyphs, and an extensive OpenType features set including small caps, standard and discretionary ligatures, contextual and stylistic alternates, stylistic sets, case sensitive forms, and much more.

Copyright 2021 by Fontfabric. All rights reserved.

This document is the End User License Agreement between Spacetype LTD (the Licensor) and the user (the Licensee), which could be an individual, company, organization, and so on.

By purchasing, downloading, installing, or using by any means Spacetype LTD’s fonts, you agree to the terms of use stated in this Agreement.

The Licensor – defined in this Agreement is Spacetype LTD. The Licensor is the exclusive owner to the copyright of the design and digital typeface software (fonts).

The Licensee – defined in this Agreement is the individual, company, organization that is entitled and authorized to use the digital typeface software, as stated in this End User License Agreement.

The right of the licensed party may not be relinquished or granted to a third party. The Licensee may provide the digital typeface software to a graphic designer, printer or other services that are working on the Licensee behalf until the end of the project. The end-user must agree to use the digital typeface software exclusively for the Licensee work, agree to the terms of this License, and retain no copies of the font on completion of the project.

1. Spacetype LTD may update the products and fonts under this Agreement. The Licensee can receive a new version of the software described in this Agreement.

2. All products and fonts licensed by Spacetype LTD are subject to warranty. Suppose the Licensee can prove that the font does not work according to its specifications. Spacetype foundry is entitled to fix and remove any dysfunction in the software. If we fail within 30 working days of your first information, you may ask for a refund.

4. The Licensee can NOT distribute, sell, resell, rent, lease, sublicense, give, lend or give away any versions of the fonts or any derivative works based on the fonts themselves.

5. The Licensee can NOT commission a third party to modify, rework, or edit the font files without Spacetype LTD’s permission and written consent.

6. If the Licensee fails to comply with any term of this Agreement, Spacetype LTD has the right to terminate the EULA with five days notice. Upon termination, the Licensee must destroy the written materials, the fonts, and all copies of them, in part and whole, including modified copies, if any.

7. In breach of this Agreement, the licensing party is subject to compensation in accordance with the violation. The Licensee is still obliged to obey to this EULA.

10. All purchases are subject to a refund if all of the following criteria are met:
• The Licensee has not used the fonts for any project;
• No more than 30 days have passed since the date of purchase of the fonts;
• The fonts have been uninstalled and deleted from all storage locations of the Licensee.

11. The Licensee may not under any circumstances embed the licensed fonts into software or hardware products in which the purchasers of such products will use the fonts. This type of use requires a different kind of License. For more information, you can contact us at [email protected]

12. A copy of the fonts may be sent to third parties (print house, designers, web developers, app developers or others) if necessary, who are directly involved in the work and preparation of a project of the licensed party. These third parties must comply with all the rules for the use of the fonts stated in this Agreement. And they must delete all copies of the digital typeface software once their work is done.

13. The permitted number of uses of the Digital Type Software is indicated in Section one of this document. If this number exceeds the one stated, please contact us to get an update.

1. With each purchase, а Licensee is granted corresponding to the number of licenses (noted in Section one). The number of Licenses is effectively the number of users (within a licensed organization) that can use and install the fonts at the same time, complying by all the rules in this Agreement.

2. The Licensee can use the fonts to create any vector or raster image. You can apply them to all different media like print materials, documents, video or photo editing, designing logos, or any other graphics.

3. The License can NOT modify the fonts under any circumstance and can NOT convert the granted files formats to others by any means.

2. The Licensee is required to use only the Web Font software provided by Spacetype LTD. The Licensee can NOT modify the fonts under any circumstance and can NOT convert the granted files formats to others by any means.

3. The Licensee can embed the fonts into websites using the CSS @font-face technique. The fonts can not be embedded in others format or in any other way under this Agreement. The Licensee can not use the fonts to create or save raster or vector images.

1. With each purchase, the Licensee is granted a certain amount of Digital Ad impressions (noted in Section one) that the font can to be used in. The number of impressions may NOT exceed the amount stated in this Agreement (indicated in section one).

2. You are permitted to install or provide for the installation of the Fonts on a server that is owned and controlled by you or authorized third party with which you have a agreement regarding the use, storage and security of the Fonts files which is for the purpose of publishing Digital Advertisements.

1. With each purchase, the Licensee can be granted a certain amount of fonts that may be embedded in unlimited applications. The number of Distributions of the applications may NOT exceed the amount stated in this Agreement (indicated in Section one).

2. The use of the digital typeface software is restricted within license organization in preparation for their use in applications. The Licensee is NOT allowed to use fonts for purposes other than embedding them in the application. The Licensee is NOT authorized to embed the font files in PDFs, word processing documents, spreadsheets, labelled photos, static images, scalable images, advertisements or other forms of data files.

1. If the Licensee is granted a Trial Font License (noted in Section on) they can use the fonts for testing and trying within the Licensee’s organization. The fonts can also be used to showcase projects to a client or any other third party. All trial fonts are only meant to be used as a preview and are not to be used for final projects.

2. The Licensee can NOT use the granted trial fonts for any final commercial or personal work or project by any means without first acquiring an additional license (Desktop, Web, App or Other License).

3. The Licensee can NOT modify the fonts under any circumstance and can NOT convert the granted files formats to others by any means without Spacetype Ltd’s prior consent.

4. The Licensee can NOT send, relinquish, distribute, or give away by any means the granted trail fonts outside their organization without Spacetype Ltd’s written consent.

1. This document does not give the Licensee the right to use the fonts for other kinds of media like Broadcast, Epub or anything different. If you wish to get this kind of License, please contact us at [email protected] 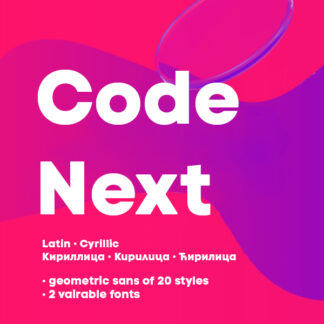