View cart “Kholodos Demo” has been added to your cart.

Description
“In 2016, the opening of an inscription in ancient Greek in the underground gallery of the Ancient Theatre in Plovdiv (Bulgaria) changed the idea of ​​its creation. And while the historians were inspired by the content of the inscription, I was inspired by the extraordinary drawing of the Greek letters and decided to revive them. I started the Cotys project by creating the Greek and Latin letters. Then I turned to the famous Ukrainian font designer Viktor Kharyk and offered him to continue the project together. Viktor created the Cyrillic letters, the lowercase letters for Latin and Greek script, and also complemented the font with multiple ligatures. Thanks to Victor’s work, the font has a rich ligature knit and creates conditions for finding unique design solutions. Multilingual support in the font – Latin, Greek script, Cyrillic (Russian, Ukrainian, Belarusian, Bulgarian, Serbian), creates a broad prospects for the use of the font Cotys.”

Viktor Kharyk is an Ukrainian designer, b. Kiev, 1957. Graduate of the Senior College for Print and Design in Kiev in 1982. Viktor became art director at Sphera in Kiev. Main type designer at Kiev-based company Unique GmbH in 1988-2001. In 2012, he cofounded Apostrof with Konstantin Golovchenko. He designs Armenian, Greek, Georgian, Devanagari, Hebrew, Cyrillic and Arabic fonts, and is particularly interested in revivals of ancient, forgotten, or historically important typefaces and writing systems.

Stefan Peev is a philologist, graphic designer and publisher in Bulgaria. He is the creator of fonts with a free license, which incorporates the Bulgarian form of Cyrillic. He is active in the field of historical typography. He prepares for the publication of several Old Bulgarian fonts, as well as digital replicas of the civic font, approved by the reform of Peter I in Russia in 1708-1710, as well as the handwriting of Vasil Levski and other historical figures.

Be the first to review “Cotys LGC” Cancel reply 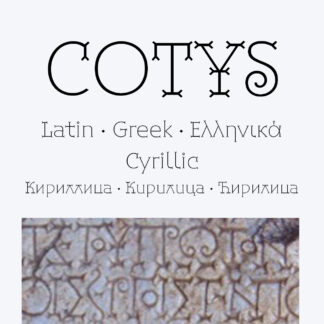