Parmigiano Headline is the group leader, the posh and self-confident cut of the family. Of all the other styles of the family it is the closest to Bodoni’s original designs and has the most contrast. It also features smaller bowls as well as delicate and subtly refined shapes. Its generous ascenders add elegance, and its narrow proportions balanced by round letterforms make it a space-saver. Parmigiano Headline is perfect for use at big type sizes without sacrificing the black and white rhythm within the line, a great choice for advertisement and magazine titles.

Headline’s frugality, delicacy and controlled width recall some of the display cuts in Bodoni’s 1818 Manuale Tipografico. Far from being a facsimile of any of Bodoni’s types, however, Headline is more of a synthesis of the key features to be seen in his bigger romans. It was specifically conceived for setting titles and headlines, and is not recommended for sizes smaller than 20 points.

Be the first to review “Parmigiano Headline Pro” Cancel reply 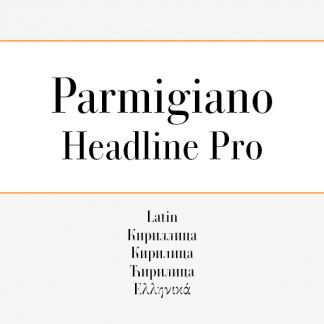