Parmigiano Text has a delicacy which contrasts with the Piccolo version and it is more solid than the Headline cut. Highly versatile, it is an ideal choice for setting magazines, books or any other long texts whose contents need to be easily accessible. Designed for smooth readability, its sharp and elegant letterforms make for a comfortable, relaxed reading experience, while its thin, horizontal serifs, vertical axes and the round terminations on certain lowercase letters give it a thoroughly contemporary feel.

Compared with the continuous text typefaces cut by Bodoni himself, Parmigiano Text has a higher contrast and a less eccentric structure. While it retains a certain distinction, eye-catching details more suited for display purposes have been softened in order to offer a more neutral effect, making it the easiest to use of the Parmigiano fonts. It is recommended for use in sizes 10 points or larger; sizes smaller than 10 points are adeptly handled by Parmigiano Caption, which was designed for this purpose.

Be the first to review “Parmigiano Text Pro” Cancel reply 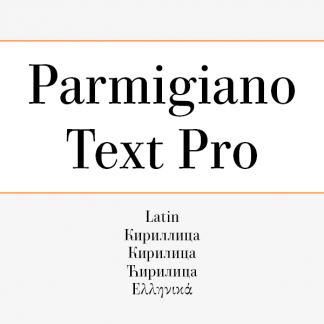