Parmigiano Piccolo may at first seem utterly foreign to Bodoni’s design principles, and its thick-set, ungraceful design would seem to belong to another family. Although it shares the same structure as the other cuts of the system, Parmigiano Piccolo is closer to the Scotch Roman models of the early 1800s, with their reduced contrast, shorter ascenders and descenders, and rather narrow proportions. And just as the Scotch Romans were the outcome of commercial considerations, Parmigiano Piccolo focuses on practicality and legibility. Although its features set it apart from the elegant refinement of the rest of the Parmigiano family, it is the one to trust in critical conditions. Thanks to its reduced contrast and strong serifs, it is the perfect choice when the texture of the paper or the quality of printing threaten your text, or when you are looking for a deliberate touch of roughness.

Be the first to review “Parmigiano Piccolo Pro” Cancel reply 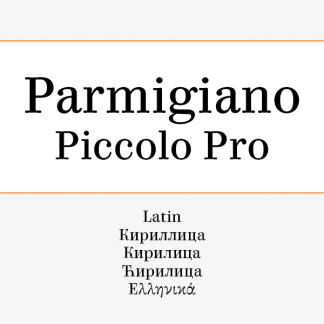